After about five years of posts addressing various aspects on the evolution towards 5G Cloud-Edge Computing, I’ve been asked to start elaborating some ideas on “what’s next”.

My take is that in the next 5-10 years there will be the true techno-economic chance of maturing and extending the perspective of the networks as part of a sort of pervasive “nervous system” of the Digital Society: a vision which I coined in 2014 for the first time at the Plenary of the EuCNC Conference in Bologna. 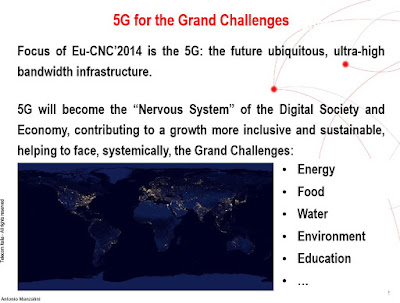 Overall, we may summarize that a "nervous system” is about sensing the reality, comparing sensations with predictions and, eventually, acting on the reality in order to best adapt to the environment dynamics. This is a sort of “intelligence”, naturally embedded in living organisms.

The idea that the brain, and more generally a nervous system, is like a network with inference engines is not new. As a matter of fact, the main task of the brain is trying to optimize probabilistic representations of what caused its sensory input: in other words, the brain has a model of the world that it tries to optimize it using sensory inputs to improve adaptation. This optimization is finessed using a (variational free-energy) bound on surprise.

And this is done very efficiently, consuming only a few tenth of Watts !
This is great challenge as today AI is highly energy consuming ! Current AI technologies are very electricity-hungry, a problem that is manifesting itself both in the cloud and at the edge. Cloud servers and data centers currently account for around 2 percent of power consumption in the U.S. According to some forecasts, data centers will consume one fifth of the world’s electricity by 2025.

Take a look at this amazing paper by K. Friston, “The free-energy principle: a unified brain theory?” How can we bring these concepts into a pervasive network to transform it into a "nervous system"?

In summary, it is likely we'll see a true “internet of intelligence” connecting “minds” with new forms of communications and interactions, sensing the reality with the most advance technologies (e.g., THz sensing), comparing sensations with predictions by means of Optical/Quantum Intelligence (much beyond today AI), and eventually, acting on the reality to best adapt to the environment dynamics.