A Digital Nervous System for the Industry4.0

A profound Digital Transformation is impacting the evolution of the Digital Society.


The levels of maturity and the convergence of a number of techno-economic trajectories such as: the penetration of ultra-broadband fixed and mobile and the coming of 5G, the down spiralling cost of IT systems and the contemporary increase of their performance, the evolution of the Cloud Computing towards Edge and Fog Computing, and remarkably the consequent Cloudification of the Telecommunications.


The Digital Transformation is transforming also the Industry.

In fact, the term Industry 4.0 is becoming more and more popular to refer to the so-called fourth revolution: in fact, the first industrial revolution mainly concerned mechanization through water and steam power; the second one addressed mass production and assembly lines using electricity; the third was based on the adoption of computers and automation to enhance production and assembly; eventually the Industry 4.0 is bringing the concept of Smart Factories based on the digitalization and seamless interworking of processes and  production steps, from planning stages to actuators in the field.

Machinery and equipment will be able to improve processes through self-optimizations and autonomous adaptation to the environment conditions (e.g., from local ones to market requests).

Among the major technology drivers for industry 4.0 there are: availability of huge computational power at low costs, low-latency high bandwidth connectivity, Big data Analytics and AI systems, human machine interaction and digital to physical conversion. Industry 4.0 will allow faster, flexible and efficient processes (from product development and purchasing, through manufacturing, logistics and service) digitalization and integration of vertical and horizontal value chains, digitalization of product and service offerings, digitalization of business models and customer access.

No need to say that market opportunities are huge. For example, according to a report by HSRC (Global Industry 4.0 Market& Technologies 2018-2023) the Industry 4.0 market is projected to reach $214B by 2023.

In Industry 4.0, smart manufacturing is based on cyber-physical systems, or digital twins, as virtual models of processes, products, and services. Through ubiquitous, low-latency 5G connectivity, smart sensors transmit data to the Cloud-Edge Computing where the data are processed and analyzed with AI system to provide contextual and predictive data in order to make decisions the actuated in the reality. 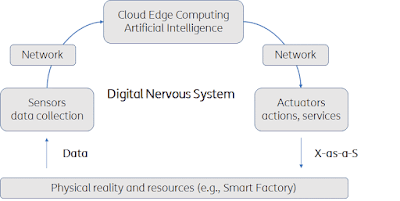 In Industry 4.0, the convergence of manufacturing and services is going to be fueled by the XaaS model which has recently emerged in the Digital Transformation of Telecommunications. In fact, the introduction of technologies such as SDN (Software Defined Network) and NFV (Network Function Virtualization), supported by the virtualization of any resource and function, put forward the model XaaS, both in a Telco infrastructure and in any reality.

This is what we call by Cloudification of Telco Infrastructures: a Digital Transformation of Telecom Infrastructures spanning from the network PoPs to the Data Centers up to the edge nodes, Users’ terminals and Smart Things where “virtualization” is acting as a unification framework.

In summary, Cloudification of Telco Infrastructures is representing an opportunity to develop a Digital Nervous System for the Smart Factories of the Industry 4.0. In fact, Cloudification will allow: 1) collecting and processing the Big Data of the Smart Factory; 2) processing Big Data with A.I. methods/algorithms and comparing results with plans in order to infer decisions; 3) actuating XaaS (even automatically) in terms of actions, with multiple actuators, devices, smart things to communicate, control and optimize Smart Factory’s processes, etc…