Idea of exploiting a sort of Operating System for Smart Cities is not new, today. It's a few years that some Cities are developing and experimenting it. Just to mention some examples, there are the brilliant experiences of Bristol and Barcelona with the so-called CityOS.

We know that in Computing systems, the adoption of an Operating Systems facilitated applications development and diffusion by providing controlled access to high-level abstractions for the hardware resources (e.g., memory, storage, communication) and information (e.g., files, directories). Similarly, in a Smart City, one may imagine a sort of Operating System facilitating City's applications and services development by providing controlled access to high-level abstractions of the City resources.

In general, a City Operating System will allow:


In other words a City Operating System will allow:

so it will introduce cognitive “control loops” into the City, creating a sort of Nervous System for it ! That's why I like to call the cities of the future, Cognitive Cities.

Obviously a Cognitive City OS will include some of the corresponding functions/capabilities, which are typical in an Operating System, but referring specifically to the resources and services of a City... and my take is that A.I. will be everywhere around us, fundamental to help taming the cyber-security risks. 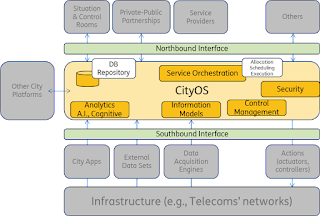 In fact, up today, we are using quoting the well-known sentence "Software is eating the World", but looking ahead it will be more "Cognition will optimise the World" !

Technology evolution as a collective phenomenon

Today we are witnessing a growing interest on Artificial Intelligence methods and systems (from the terminals to the Network nodes to the Clouds), about on exploiting cognition capabilities into robots or autonomous vehicles, self-learning avatars, autonomic bots, etc... Even we are looking at a sort of Nervous System for the overall Digital Society and Economy (see my previous posts). It looks like we are pursing the embodiment of the "cognition and autonomic" paradigms into Telecommunications and ICT.

In this avenue I believe we need leveraging much more than we are doing on Biology, Neuroscience, Analytical Psychology and all those efforts which are targeting the understanding of Biological Intelligence; not also, also we need to leverage on Physics for the deeper physical phenomena governing the cognition. Some solutions are already there, and maybe we need just applying them to a specific new context. I could mention several of them.


The theory of F. Varela is one example of the still very popular approach to understand the roots of cognition in very simple living entities (see “The Embodied Mind: Cognitive Science and Human Experience”, Cambridge, MA: MIT Press)

The theory argues that adaptive behaviour of simple living system (e.g., an ant or a bee) is based on two interrelated points: 1) perception consisting of perceptually guided action and 2) cognitive structures, emerging from the recurrent sensori-motor patterns, enabling action to be perceptually guided. In particular, during their life, the living systems cross several and diverse cognitive domains (called micro-worlds) which are generated from their (local and maybe also non-local) interactions with the external environment: within a micro-world the behaviour is determined by pre-defined sensori-motor loops, very simple and very fast and automatic; from time to time breakdowns occur which are unexpected disruptive situations determining the need to change from a cognitive domain (i.e. from a micro-world) to another one. Importantly, this bridging (during breakdowns) is assured by the “intelligence” of the nervous system (allowing a new adaptation and the consequent learning of new sensorimotor loops). So, within a certain micro cognitive domain, the behaviour is directed by a set of sensory-motor loops, which are fast and performing sort of well trained, automatic reactions to the local situation. When a breakdown occurs, which is an unexpected event, the nervous system reacts developing a set of possible alternative reactions. During these trail-and-error phases, eventually a specific sensory-loop prevails which allow reacting properly to the unexpected event. So, the living system, entering this new micro cognitive domain, has learnt a new sensory-motor loop, and so on.

Example: imagine a termite bringing some food into the nest (a sensory-motor loop) when suddenly a collapse of a gallery happens: this is a breakdown. Termite should enter a new cognitive micro world to try overcoming the obstacle. A new sensory-motor loop is developed and learnt (how overcoming a collapsed gallery). They say that the connections between these systems, micro cognitive domains, happen through a sort of overall structural coupling with the overall environment (the colony), through  a sort “field”, i.e. space-time gradient of electromagnetic fields (and potential), sounds, intertwined with tactual and metabolic information. These gradients are triggering the overall collective reactions, e.g. in terms of alignment of micro cognitive worlds. This is collective intelligence, this is how Nature's technologies works in a sustainable way.

This cognition model (balancing local vs global cognition) could be perfectly applied to develop swarms of robots or drones in Industry 4.0 scenarios.