If today "software is eating the world", quoting Marc Andressen, tomorrow A.I. will bring to the end of code. See what it argued here.

Well, even today we are going to have more and more smart terminals, wearable, machines capable of translating our actions, thoughts, words and maybe even emotions into enormous sets of big data.
Then these data are are filtered, processed to detect patterns, to infer actions (i.e., making the data “actionable”). It's the Digital Society and Economy.

As a matter of fact, this coupling of TLC (fixed-mobile low latency connectivity) and IT (processing and storage) are already pervasively exploiting (through sensors and actuators) “cognition loops” nested into the reality, These “cognition loops” are used to optimise any process or activity, engaging even humans in the loop ! I've argued that several times: it's a sort of artificial "nervous system" for the Digital Society and Economy.

Advances on machine learning are impressive! The enormous processing power available at low costs and the more and more advanced A.I. techniques being developed, will allow us moving deeper inside "softwarization": I won't be that surprised if sooner that we expect programmers won’t code anymore!

Eventually, humans will set-up and train deep neural networks, hyper-connected and executed on highly distributed execution environment. Indeed this is mimicking a multilayered connections of neurons, just like a nervous system, in charge of "automated" operations. See my last posts.

This is the essence of my talk today at EuCNC2016, in Athens. 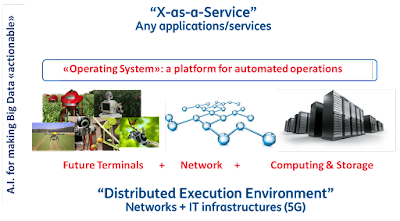 The Telco Operating System and the Commoditization

If it is true that this transformation will increase the levels of pervasivity, flexibility, programmability and robustness, it is also true that it will increase also the degree of complexity.
Human made control and management will not be able to cope such higher degree of complexity especially in highly dynamic environments, so my take is that Artificial Intelligence (A.I.) will be more and more adopted in Control, Management and Orchestration processes.

A sort of “Operating System” (OS) will integrate these Operations processes for Telecommunications infrastructures, being ONOS and X-OS initial expressions of this target. Interestingly, the characteristics of this OS, and its potential extension up to the terminals of the future (e.g., smart thing, robots, machines, wearable, AI interfaces), will reflect the strategic role and business of the Service Provider or Network Operator exploiting it.

So, it’s a questions – as J. Doyle argued (see picture below) – to define and exploit those required "constraints to deconstrain" what is on top of it. Abstractions, Northbound (e.g., Intent, TOSCA, YANG, etc) Southbound (e.g., OpenFlow, NetConf, ..., P4, etc.) interfaces being notably examples of these constraints. And the kernel OS should be protocol-independent. 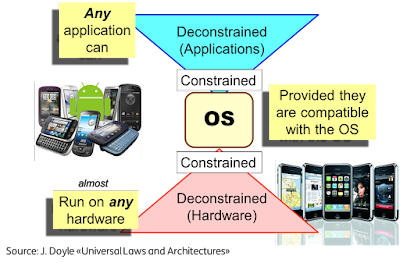 At the end of the day, we'll see - with this OS - any application/service (X-as-a-Service) will run on any hardware (possibly standard and low cost) of Telecommunications infrastructures (e.g., distributed Cloud-Edge-Fog computing resources interconnected by ultra-low latency link). Simple like that. This is Universality: any car running on any road across the world.

This is how Commoditization of Telecommunications will open a major techno-economic transformation of the Digital Society and Economy...today, only at the very beginning.

Let's join efforts to design and develop this A.I. Operating System with humans in the loop, it will be the nervous system of the future internet.

A 5G Networked A.I. with humans-in-the-loop

A unit of Chinese internet giant Baidu Inc. has developed an algorithm that can predict crowd formation. They published results in this amazing paper http://arxiv.org/abs/1603.06780 .

This piece of news also reported at the end of March by The Wall Street Journal: Crowd Control ?
http://blogs.wsj.com/chinarealtime/2016/03/23/crowd-control-baidu-has-an-algorithm-for-that/?utm_content=buffer3ca02&utm_medium=social&utm_source=twitter.com&utm_campaign=buffer

Machine-Deep Learning and algorithms capable of using crowd (and in general network) big-data to make predictions have a clear strategic value (for example for optimising service provisioning, for anticipating new trends). Big Data should be made "actionable".

Commoditization of Telecoms is opening up a new era for the A.I. applications: ambients that learn, self-driving cars, high frequency trading bots, I4.0 robotics, emulating/creating new drugs, developing contents and even music (e.g., Magenta), any sort of Avatars (e.g., Cortana)...

Indeed we are witnessing the rise of a "Networked Artificial Intelligence" with the humans-in-the-loop. In fact, see also this analyst-in-the-loop security system, which combines analyst intuition with machine learning to build an end-to-end active learning system for security.

According to Jeff Bezos (CEO of Amazon): “A.I. is going to become  gigantic and it's probably difficult to overstate the impact it will have on society over the next 20 years“

So we can argue that, current socio-economic drivers and IT trends are bringing to a convergence Computer Science, Telecommunications and A.I.. Mathematics will be the language, computation will be about running that language (coded in software), storage will be about saving this encoded information and, eventually, future networks (e.g., 5G) will be creating relationships –at almost zero latency - between these sets of functions.

I believe that the design, development and exploitation of this “Networked A.I. with humans-in-the-loop” will be one of the most exciting and impactful directions of research and innovation, requiring multi-disciplinary approaches and offering far reaching opportunities for our society and economy.


I'm pleased to say that it has been a very successful event with a large international participation. The Workshop is structured in two events:

Several Service Providers from EU, US and Asia participated as well as Technology Providers and Academia representatives. Final goal - in fact- will be developing a larger and larger community suppoting and contributing to OMEC with open H/W and S/W approaches.

Agenda is here: https://t.co/qQendQ8lSC
A Service Providers' white paper will be produced out of the Workshop.


For getting further information just drop me an email.