Have a look at this: it is reported that Aalborg University, MIT and Caltech have developed a technique boosting internet data speeds by up to 10 times, by making the nodes of a network much smarter and more adaptable.  This approach could also improve also the security level of the transmission.

The technique is mathematically-based and it is known as Network Coding and it adds adding intelligence at the node level: instead of making the classical store-and-forward, each node builds a set of linear equations, using both the numbers extracted from the content of the packets and a set of randomly generated coefficients. A linear equation forms a "coded packet" where the coefficients are stored inside the coded packet's header, and the unknown variables are the actual contents of the packets, considered as a number.

Network Coding is compatible with Software Defined Infrastructures (SDI) where network functions and services are virtualized and dynamically allocated onto physical resources, both centralized and distributed. So, also Network Coding could be virtualized and the intelligence could be at the node level from a logical perspective, but physically it could be executed in a cloud.

This idea of adding intelligence at node level resonate also self-organization, or autonomic capabilities. Complexity of future Software Defined Infrastructures, supporting the dynamic interactions of millions of software processes, will require self-organization capabilities in the orchestration, management and control functions (both centralized and distributed at the nodes level, obviously).

No need to say that today, Self Organizing Network (SON) is a well-known avenue of RT&D which is about intercepting SDN and NFV trajectories.

Softwarization and Componentization of Manufacturing

We’re witnessing that technologies advances are progressing at an impressive rate: processing is continuing to follow the Moore’s curve and it is doubling in capability roughly every 18 months; storage capacity on a given chip is doubling every 12 months. Add this to ultra-broadband diffusion.

All of all this is creating the ideal conditions for the software eating the world , as Mark Andressen argues. In other words, these trends are leading to a progressive “softwarization” of any Industry, which appears to be an unstoppable trend, because of the costs reductions and the new business opportunities it will bring.

Many business will be "commoditized". One of the most mentioned example is about the evolution of Computing: from mainframes, as large as a room, accessible only to big organizations, up to embedding more and more powerful processors in anything, or up to accessing computing as an utility, at very low costs. It’s the last phase of a technology transformation cycle. This will have an impact on manufacturing, as well. And the network will play a new role, "disappearing" into the Digital Society and Economy.

Have a look at this nice presentation about Future Proof Design here. The big deal seems moving from a monolithic production where “Producers create a product and Consumers will consume it” to another perspective, where the “Producers develop the seeds of ecosystems and the Consumers’ communities will contribute to the creation of the products they will consume (or even sell)”.

In summary, it seems that the new challenges for SMEs and web entrepreneurs in the coming era of softwarization will be:

Universality and Open Ecosystems for the Age of Softwarization

If I were at NetSoft today, I would have opened our flaship conference this way...

It has been mentioned several time that Software-Defined Network (SDN) and Network Functions Virtualization (NFV) are just different facets of an overall systemic and disruptive transformation, the so-called Softwarization, which is going to impact Telecommunications, ICT and other related ecosystems.

In fact, even if SDN and NFV are well-known paradigms, since a few decades, today they are (probably) becoming exploitable and sustainable, given ultra-broadband penetration and the increasing performance and the down-spiraling costs of ICT. As such, SDN and NFV represent just a part of the Softwarization process which will transform our Society: Cloud, Fog and Edge Computing are part of the same systemic picture. And also Internet of Things.

SDN is not the next "networking paradigm" and it makes no sense considering it independently from NFV as from the other paradigms, such as Cloud, Fog and Edge Computing.

It's Softwarization, simple enough, but highly disruptive, opening the way to Open Ecosystems.

in fact, Softwarization is going to bridge several gaps: one is the line between the applications of Terminals, Consumer Electronics, Smart Things, Machines and the businesses of the Digital Enterprise and even more the processes of Industry 4.0. Terminals, wearable and any robot, machine...in fact will become part of a pervasive, dynamic and highly flexible virtual infrastructure capable of handling complex communications and business processes (including mission critical applications).

Huge datasets produced by pervasive machines, terminals, sensors, and devices will be moved and handled in real-time: massive and pervasive horizontal infrastructures, based on ultra-low latency links and capable of running powerful compute and storage engines. This will end the age of vertical silos.

Then, future Telecom-ICT infrastructures will look like pervasive, massive, multi-domain Data Centers or “Supercomputers”, with fixed and mobile ultra-low latency links providing the required pervasive connectivity. We can imagine then a sort of Operating System (OS) managing the hardware and software resources and providing sets of services, programmable with APIs. On top of this OS, applications will flourish to create and develop the new ecosystems for the Digital Society and Economy. ON.OS is not that far from this model…which should be extended to mobile ecosystems.

The value is moving from hardware to software and the software will be the mean for implementing flexible architectures-of-architectures based on cognitive, deep-learning algorithms, A.I. methods...and other mathematics crunching datasets to infer decisions, to learn and to actuate actions onto the reality.

Main systemic characteristics should be universality (e.g., based on recursivness of a limited number of functional component and blocks) and openness (e.g. adopting Open Source Software and Hardware). Main technical challenges include:

I hope that NetSoft will contribute bringing some answers to these and other relevant questions.

Drop me an email if you wish joining our Community !
Posted by Manzalini at April 13, 2015

Softwarization is paving the way to the Industry 4.0.

Originally the term "Industrie 4.0" originates from a project in the high-tech strategy of the German government, which promotes the computerization of the manufacturing industry.

I think that we are moving beyond that: it’s not just about computerization, it’s about the global trend of Softwarization which is impacting all socio-economic aspects of our society.

Paradigms such as SDN-NFV are just the top of the iceberg, not new technologies but well-known paradigms (decoupling hardware from software and virtualization) which are becoming exploitable and sustainable due to ICT performance increase, costs reductions and Open-Source-XW.

Technology, business models/markets and policy are co-evolving together and the degree of “complexity” will dramatically increase.  Complexity is indeed what is needed for a change of paradigm, it should not be confused with "complication": the challenge will be extracting the proper levels of “simplicity” to exploit business opportunities out of that.

The Net will be the "nervous system" of Industry 4.0.

Which way ? Embracing fully the coming innovation wave. Rather than continuing to Telco-ize the Net with "big iron" nodes it’s time to IT-ize it radically, exploiting highly flexible “soft” processes. 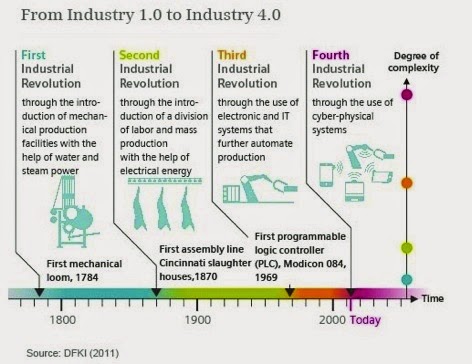 The vision of the IEEE SDN Initiative is that Software-Defined Network, Network Functions Virtualization, Edge and Fog Computing are just different facets of an overall systemic transformation, the so-called Softwarization, which is going to impact Telecommunications and ICT ecosystems.
Softwarization is not just about Telecom networks. It’s about the evolution of the Cloud Computing towards the Edge and the Fog Computing and it’s about terminals, smart things, machines, robots…
Not only. It’s about plenty of industrial ecosystems. It’s a systemic innovative transformation.
NetSoft 2015 is the 1st IEEE Conference on Network Softwarization, the flagship Conference of the IEEE SDN Initiative.  NetSoft Conference will be in London, hosted by UCL, on April 13th to 17th, 2015, and it will be a venue where discussing new innovative ways towards the future of ICT and Telecommunications.
We’ll be discussing the main impact of Softwarization on Telecom networks: for example that (sooner than expected) all network functions and services will be virtualized, dynamically allocated and executed as “applications” onto a hosting physical infrastructure, which will be fully decoupled, from above software platforms.
This is the dramatic end of the age of silos, a Red Ocean today. The value is moving from the hardware to the software, specifically to horizontal platforms. And beyond the software towards the cognition, the next big deal.
Softwarization is likely to be a disruptive point of discontinuity as it will pave the way towards the Digital Society and the Digital Economy, changing the old rules of the game and creating a new Industrial revolution. SDN and NFV are old concepts today exploitable and sustainable. An opportunity and a risk: in fact not all Industries are ready to embrace this change of paradigm and business models.
Digital Economy is moving into the Blue Ocean.
Simple enough, ICT is progressing at an impressive rate and its costs are declining. This is creating the sustainable conditions for the “software eating the world”, as Mark Andressen predicted. Softwarization of plenty of Industries and ecosystems will be an unstoppable trend, because of its costs reductions and the new business opportunities it will bring to all.
If You would like to be concrete involved in this bottom-up dream, shaping the way towards the real Digital Society and Digital Economy please contact me and I will help find the right area(s) of interest for You. I like inviting You to visit our SDN Web Portal for the latest details on how IEEE SDN initiative can help to support your technical and professional growth.
Join us with a free membership to the SDN Technical Community Free SDN Technical Community !
Posted by Manzalini at April 04, 2015